In celebration of Manufacturing Day 2016, high school students throughout the Northwest Tennessee region will participate in tours and presentations with local manufacturing companies as part of an effort to change people’s perceptions about today’s manufacturing environment and draw attention to the outstanding opportunities that a career in manufacturing can provide. Manufacturing Day, typically held on the first Friday in October, is an annual national event executed at the local level supported by thousands of manufacturers as they host students, teachers, parents, job seekers, and other local community members at open houses, plant tours and presentations designed to showcase modern manufacturing technology and careers.

In Northwest TN, the American Job Centers/TN Career Centers will host Manufacturing Month events for schools in 11 counties throughout the month of October. Lana Wood, Director of Business Services, comments, “Each county celebrates Manufacturing Month in its own way. Some industries will provide tours, while others will visit middle schools and high schools to talk about the jobs available, career pathways, and the education needed to be successful in these jobs.”

Margaret Prater, Vice President for Workforce Development for the NWTN Workforce Board adds, “The benefits of Manufacturing Month are wide-reaching. The partnerships developed between the employers, schools, the Workforce Board and higher education have resulted in manufacturing-specific training programs being added to Career Technical Education programs throughout Northwest Tennessee. The skills students learn can be directly transferred to the workplace. As a result, several employers in the region are offering paid internships to students that are successful in earning a Production Technician Certification from the Manufacturing Skills Standard Council.”

Check out the schedule of this year’s events below and click the calendar for more details! 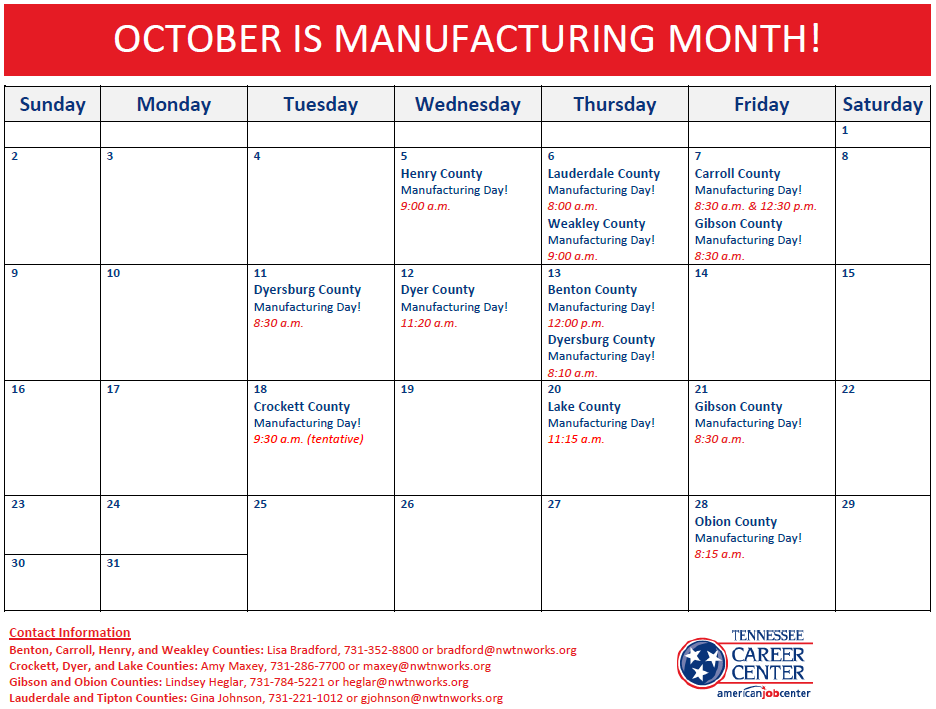 On September 22, 2016 the Tennessee Department of Labor and Workforce Development released the August 2016 unemployment rates by county.  Below are the rates by county for the Northwest Tennessee Workforce Board region (WIOA 12):

Yvette Dixon Named Board Member of the Year

At the Annual Meeting of the Northwest Tennessee Workforce Board, held September 13, 2016, Chairman Jimmy Williamson and Vice President for Workforce Development Margaret Prater recognized Yvette Dixon, Adult Education West Tennessee Representative, as the 2016 Board Member of the Year.  Nominated and elected by the staff to the Board, Dixon was recognized for her leadership and dedicated service in support of the Board and the American Job Centers.  “Yvette has been a tremendous asset to the Board” states Prater.  “We know we can always count on her to serve in any capacity needed.”  Dixon has served as a member of the Northwest Tennessee Workforce Board since 2013 and has served on the Career Center Services Committee since the fall of 2015.  She has over 15 years of experience in providing Adult Education services in Northwest Tennessee. 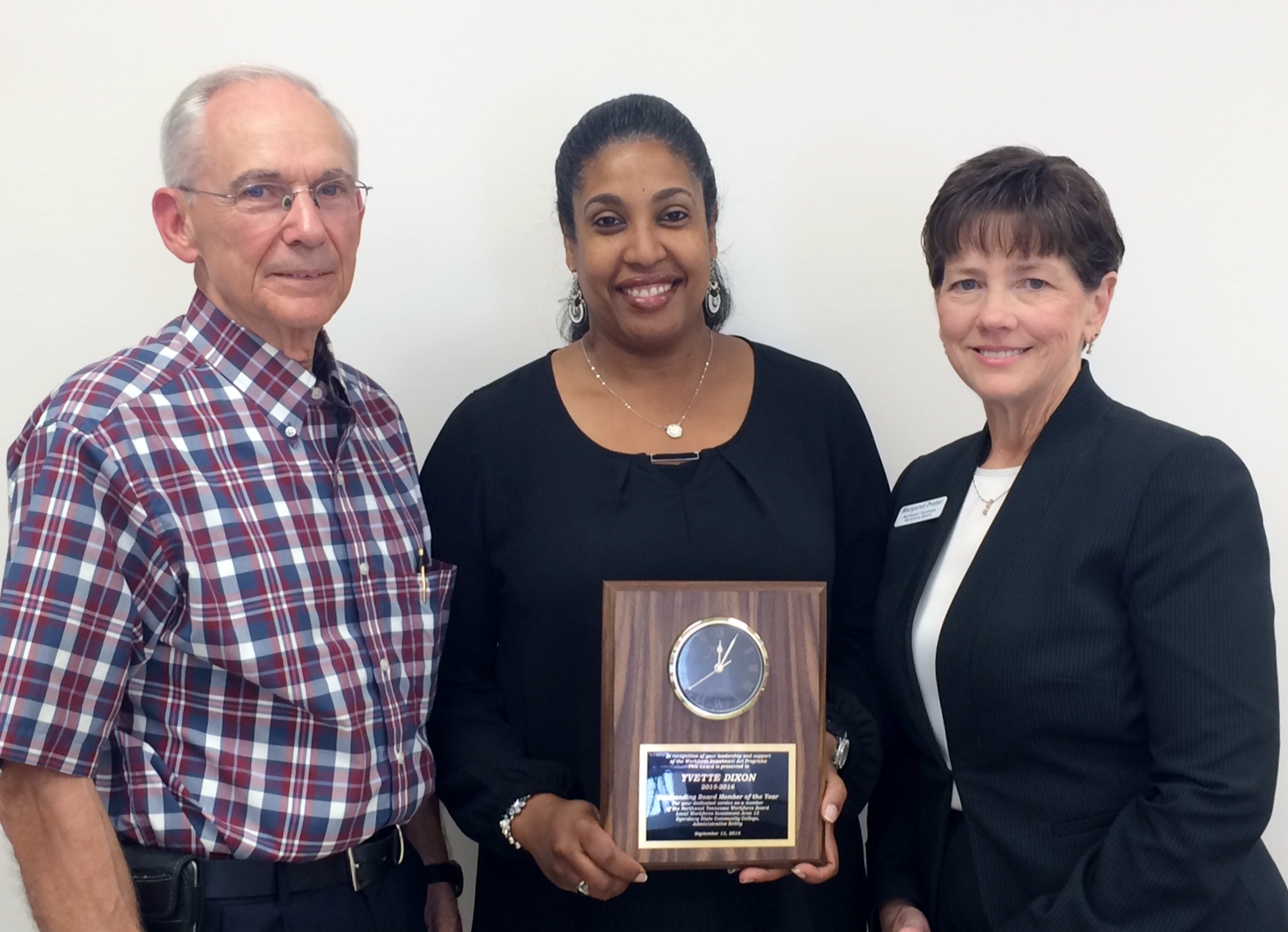 Beginning in the fall of 2014, under the leadership of each County’s Mayor, and Margaret Prater, Vice President for Workforce Development for the Northwest Tennessee Workforce Board, each county in the region formed workforce development committees to launch the ACT® Work Ready Communities initiative, a workforce system designed to assist sites and regions in developing their workforce pipeline to provide skilled workers for employers, via job profiling and the National Career Readiness Certificate™ (NCRC).  Two counties, Dyer and Lake, were recognized at the 2015 ACT® Workforce Symposium for completing all of their goals and achieving Certified Work Ready Communities status.  This year, the counties of Benton, Crockett, Henry, Lauderdale, and Obion will receive certification at the 2016 ACT® Workforce Symposium in Nashville, TN.

The initiative, supported by the staff of the region’s American Job Centers, high schools, and local employers, and funded by the Delta Regional Authority, United States Department of Agriculture, and TN Department of Labor and Workforce Development, has resulted in area residents earning over 8,000 National Career Readiness Certificates™ (NCRCs) towards certification goals in the eight counties attaining certification as ACT® Work Ready Communities:

Memphis Bioworks Foundation was recently awarded a nearly $4 million grant from the U.S. Department of Labor as part of its Strengthening Working Families Initiative. In the Memphis region, the funding will be used to facilitate short-term job training, coaching, and job placement for unemployed or underemployed parents in Fayette, Lauderdale, Shelby, and Tipton Counties. The Northwest TN Workforce Board is a collaborating partner in Lauderdale and Tipton counties.

This program will include supportive services, including funding for and access to child care resources and transportation assistance. “This grant enables a comprehensive workforce development approach to connecting parents in our region to new skills and new job opportunities while also providing support for their families,” said Steve Bares, PhD, president and executive director of Memphis Bioworks Foundation.

Training will be targeted in advanced manufacturing, health care and information technology careers. The program’s goals are to provide grant-funded services and education/training to more than 500 participants by June 2020. In addition, Memphis Bioworks will consult with the Employer Advisory Council it manages for insight and input on job training curricula, industry trends, essential skills training, and employment opportunities.

The grant will be administered among training and community partners and employers by the Memphis Bioworks workforce development team, led by Sondra Howell, Director of Workforce Development.

The Dyer County Sheriff’s Department will establish programs and deliver services at the Dyer County Correctional Work Center to establish a specialized American Job Center/TN Career Center to provide basic and individualized career services to a minimum of 25 inmates to facilitate job placement and retention upon release.

The Northwest TN Workforce Board in Local Workforce Development Area 12 has developed a partnership with the Dyer County Sheriff’s Office to establish a “specialized” TN Career Center on the campus of the Dyer County Correctional Work Center (DCCWC).  The 30-bed inmate correctional center opened summer of 2015, providing counseling on relapse prevention, drug and alcohol education and socialization to its male population.

A lengthy assessment is given to each inmate prior to be referred from the general population jail facility to the DCCWC, which is a State approved mental health counseling center. The goal of the new Jail2Job program is that by the time inmates are released, they will owe no fines, have a valid driver’s license, be drug free and have a job.

"Marvin Windows and Doors has met the evaluation standards required to receive this award by proving their ability to uphold an excellent safety record," said TOSHA Administrator Steve Hawkins, who presented the Volunteer STAR award today at the company’s facility located at 101 Marvin Drive in Ripley. “It is evident Marvin Windows and Doors is extremely dedicated to maintaining a safe and healthy workplace.” 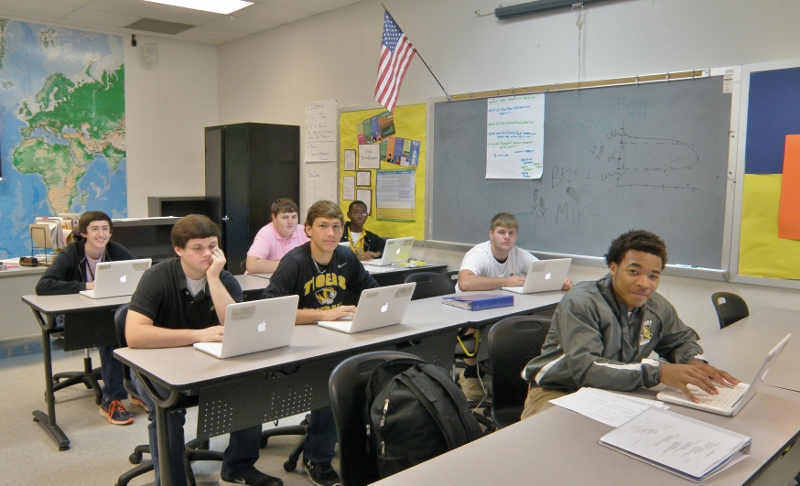 The Labor & Education Alignment Program (LEAP) grant has provided the local workforce development area a key link in tying together statewide workforce and economic development initiatives like TN Pathways, Drive to 55, Workforce 360 and the local ACT Work Ready Communities project. Offering Certified Production Technician (CPT) classes in high schools builds on partnerships the TN Career Centers have been building with local manufacturers through October Manufacturing Month tours. It also strengthens the Advanced Manufacturing Pathway for students. The coursework provides a solid foundation for young people interested in manufacturing careers. Kristy Mercer, HR Manager for Ceco Doors agrees, “Ceco is excited to see a grant offering manufacturing-friendly classes at the high school level. Laying this groundwork will go a long way in preparing the students for manufacturing careers. I think knowing that your classes will directly contribute to a future job is exciting for the students! Ceco is open to providing tours and job shadowing to complement the program. Gibson County has put forth the effort for several years to improve the workforce and working at the high school level is a great approach.” 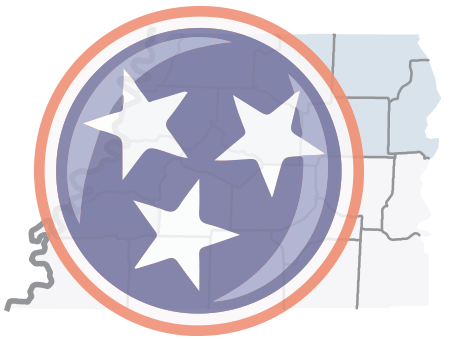 Have you visited an American Job Center? Take a quick survey to tell us about it!

The Tennessee Department of Labor and Workforce Development is an equal opportunity employer/program; auxiliary aids and services are available upon request to individuals with disabilities.